When asked to read a five-minute essay about a social space for my Fieldwork and Ethnography seminar, this is what I came up with. (Keep in mind I was trying to explain it to people who have never heard of it.)

I’m being followed by fifty-nine people. I’m following all of them, too; each relationship is more or less reciprocal. All of us routinely visit the bazaar-like space of Google Reader, an online community in the guise of an RSS aggregator. The point of an RSS aggregator is simple: bringing the diverse content of numerous blogs, news sources, and entertainment sites together in one place for convenient, personalized consumption. Google Reader takes this idea a step further by allowing each user to share especially interesting content with friends and to view and comment on content shared by others. As a result, the application is as much a form of social networking as it is a way to catch up on headlines, media reviews, and ridiculous pictures of cats. I started out by following only the content posted by real-life friends and acquaintances--my roommate, my boyfriend, my co-workers, and so on. However, after we commented on each other’s shares enough, we began to notice that friends of friends seemed to share our interests and make us laugh, too. It wasn’t long before my small list of friends grew to include not only friends of friends, but complete strangers. Among my “sharebros” (our term for people who follow each other), I can count a few of the internet hipster blogger elite, quite a few salespeople and writers, a number of musicians, and various academics who represent nearly all disciplines, ages, and regions. Many have become friends as a direct result of our finding common bonds through Reader--sometimes in the ways our research topics intersect, or in a basic shared love of food, fashion, or unusual humor.

Describing the actual experience of Reader is an elusive task, mainly because its contents represent myriad forms of authorship and appropriation that defy easy definition. The interface is simple enough: the source feeds a user subscribes to are listed by title on the left side of the screen, and the user can view a source’s content by clicking on its entry in the list. Immediately above the list of feeds is a list of people that a user follows. It is possible to view each sharebro’s “shares” in the same way; clicking on a person’s name reveals everything he or she has chosen to post. Both the user list and the source list stay in one place; users can scroll through content in the main frame of the window. Whether content is from a blog or a friend, one has the option to “Like,” “Share,” or “Share with Note” on each post. If the post is from a sharebro, one can also add comments; however, “liking” or “resharing” someone else’s content is high praise. Socially speaking, it cements the bond of your shared interests and shows public approval of someone else’s choice.

When I browse Reader, there is comfort in familiar motion. My fingers somehow automatically know to press “J” if I want to read ahead, and “K” if I want to go back to something. Touching the smooth keys of my laptop in repeated, measured form is a kind of cyborg meditation; I’m not clearing my mind, but filling it and training for my day of processing and responding to information. It’s the perfect exercise to pair with drinking coffee. Although I read enough blogs that I rarely have time for them all, beginning my day with headlines, jokes, and camaraderie is soothing. I feel not only informed, but reassured. Staring at a screen before entering the world affirms that wherever I am, I am aware of what’s going on around me and I’m part of an easily accessible, familiar social network.

Users, at least among my Reader contacts, have one main trait in common: we spend a lot of time on the internet and we value very specific informational and cultural literacies. Although we differ on many points, there are some things most of us agree upon, like terminology. “#gg,” for example, stands for “grandma glance.” The term is derived from the Fabolous song “Not Give a Fuck,” in which the speaker claims to wear a throwback jersey “so old it’ll make your grandma glance” (RapGenius 2010). Basically, writing “#gg” on another person’s share is a diss, because it means everyone--even someone less hip to online culture, like a stereotypical grandma--has seen it. On the flip side, if someone awards you a series of plus signs in a comment, you’ve said something supremely witty. But Reader’s not just mindless novelty. Newness is important, but only because it presupposes existing, shared knowledge. We have inside jokes, like malaprops and one sharebro’s bizarre obsession with the JFK assassination. Avoiding a #gg is a bit about prestige, but it’s also about respecting our sharebros’ history together. As friends, we remember each other’s interests, and share things “@” each other with those interests in mind. For example, shares @ me might make fun of my fascination with LaToya Jackson, but they might also be vintage clothing ads that people know I will like, or even links to projects that might help inform my thesis research.

Most comments are friendly, even in the context of lively debate, and the right joke or insight can even earn new friends. The strange thing about debate on Reader is there’s not much attention to scale; we can fight just as earnestly and fiercely about Morrissey as we can about education reform. And it’s not always polite. Even though I am linked to people I see everyday “IRL” (in real life), I’m also connected to strangers with very different values--some of whom still see the internet as a somewhat anonymous space for recreational antagonism. At this point, most of us try to stay out of the most intense fights. A year ago today, most of us were involved in the worst flame war I’ve ever seen, and I was at the center of it. Unlike most debates, this had little to do with politics or tastes, and everything to do with an innocuous less-than-three-style heart. I’d written the heart on many especially cool shares, but some strangers--friends of my sharebro--said that writing things like that was pointless and irritating. (In this particular case, I had started a comment thread with the far less glamorous "Cooool," but my friend and roommate immediately followed with the ubiquitous heart.) Although lots of people hurried to our defense, the thread somehow devolved into mean-spirited comments about my appearance, and battle lines were drawn according to the old rap delineations of “East Coast,” “West Coast,” and “Dirty South.” People with real life connections stayed loyal to each other online, and a comment that seemed frivolous translated into a lot of IRL emotions. A weird side effect of this fight, though, was that a lot of strangers became friends. When the absurdity of the whole thing reached its logical limits, a guy from New York whom I didn’t know posted a picture of a heart flanked by a city skyline and American flags with the caption “10/7 Never Forget.” Those who either sympathized with me or were simply appalled by the length and intensity of such a trivial fight banded together. We just started making jokes again.

The diversity of Reader is both its triumph and its curse: we learn a lot, but we also fight over everything. Still, most of us would argue that our engagement is worth the payoffs. Users are able to share content from all over the internet, sometimes of their own creation, and they also can edit and reshape others’ content to be more concise or, occasionally, more funny or editorial. As consumers, we’re appropriating content in ways that amuse each other and critique the world we live in.

While some shares are more serious than others, many of us have been able to translate our relationships into useful social connections and tangible public action. Our connections spill not only into other social media like Facebook and Twitter, but also into our real-world lives. During my last trip to New York, I met two sharebros for the first time. We spent a total of seven hours consuming pizza and beer and stories, and it felt like hanging out with any of my other friends. On other occasions, we’ve used Reader as a way to organize academic collaborations across the country, and even mount formal protests on a more local basis. The first ever Sharebro Census was taken a few months ago, and just this week, one guy used our user information to make a map of where we’re all located. Even though I still haven’t met many of my favorite online friends, our relationships are no less real than those I have with people I see in person every day. It’s possible, for instance, to miss people I’ve only ever chatted with. Ultimately, Reader is a highly creative medium for curation. It’s a way of proving one’s own cultural capital by blurring the distinctions between high and low culture, and it forces us to accept a weird brand of democracy.
Posted by Dolly at 5:52 PM 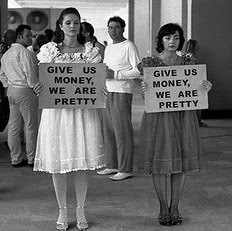 . . . mostly Mary Douglas, actually.
We are anthropologists, and this is a blog about food and the body and the quotidian (or at least what we cook and what we wear).